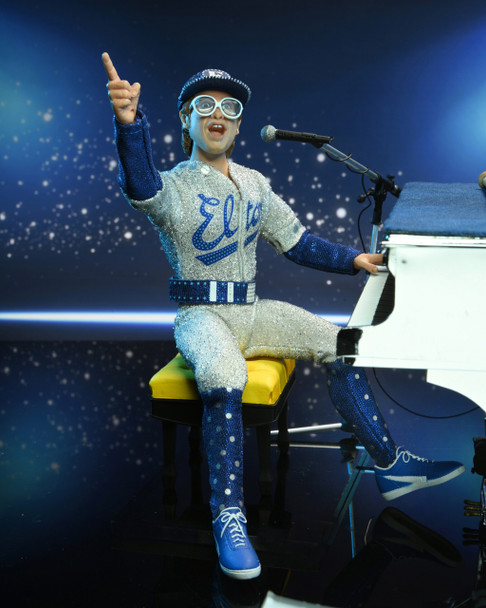 Item No. 18300
APN: 0634482183007
In partnership with Elton John, NECA introduces a deluxe tribute to the legend and his profound influence on both music and fashion. The Elton John Live in '75 action figure stands 8 inches (20.3 cm) tall and sports one of his most famous stage costumes: the glammed-up baseball uniform from his October 1975 concerts at Dodger Stadium, Los Angeles. These were the largest concerts ever by a solo artist at the time, and NECA commemorates that landmark occasion with a scaled piano as it appeared during the show!
INCLUDES
One 8" scale, poseable action figure of Elton John
Elton's baseball bat, piano bench seat, microphone stand and piano
Interchangeable hands and three interchangeable heads with different expressions of this great artist in full entertainment mode
Packaged in a Collectibles window display box
This is an officially licensed Elton John product by NECA

MSRP:
Now: $65.00
Was:
Product Features: 8 inches (20.32cm)Made of plastic and fabricBased on the famous musicianFully articulated